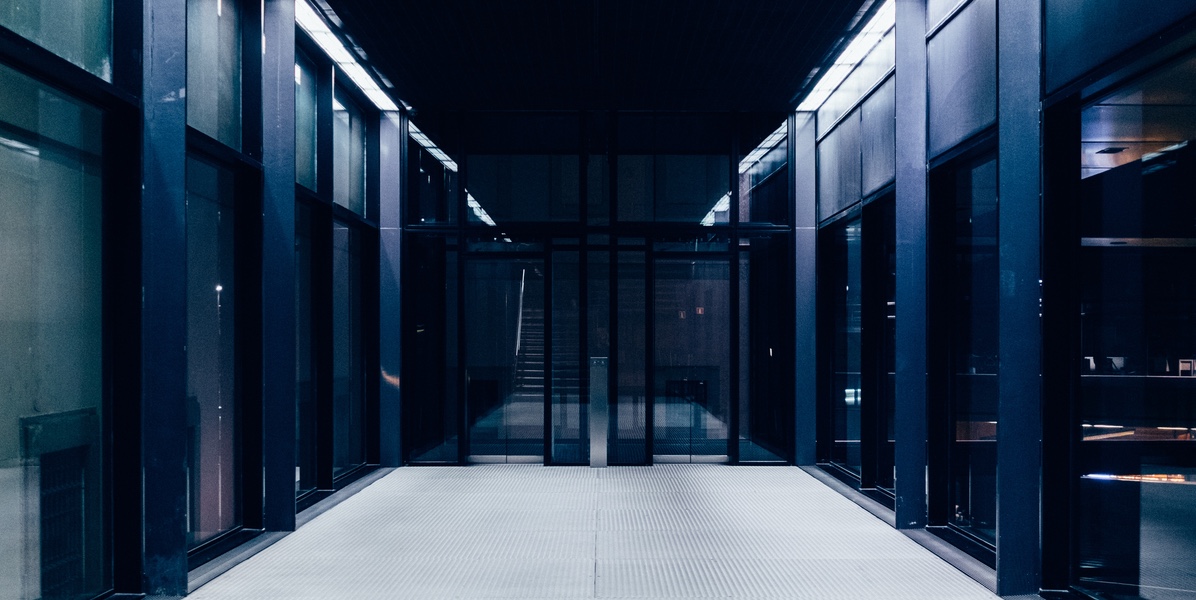 I thought it would a great opportunity to try migrating our critical infrastructure to the cloud as a stop-gap solution, so over a weekend, I migrated our on-prem GitHub Enterprise and Bugzilla to Amazon AWS, available through AWS VPN Client. The entire deployment cost $300 for the two weeks we had it active without a day of downtime for the team.

Amazon AWS provides all of the services we needed to set up a private cloud with the necessary topology. The AWS building blocks: VPC, EC2, S3, and Route 53. The AWS Management Console Dashboard provides a single interface to the entire breadth of AWS’s services. Note that some, like S3, provide a global view whereas others, like VPC, only allow per-region selection. 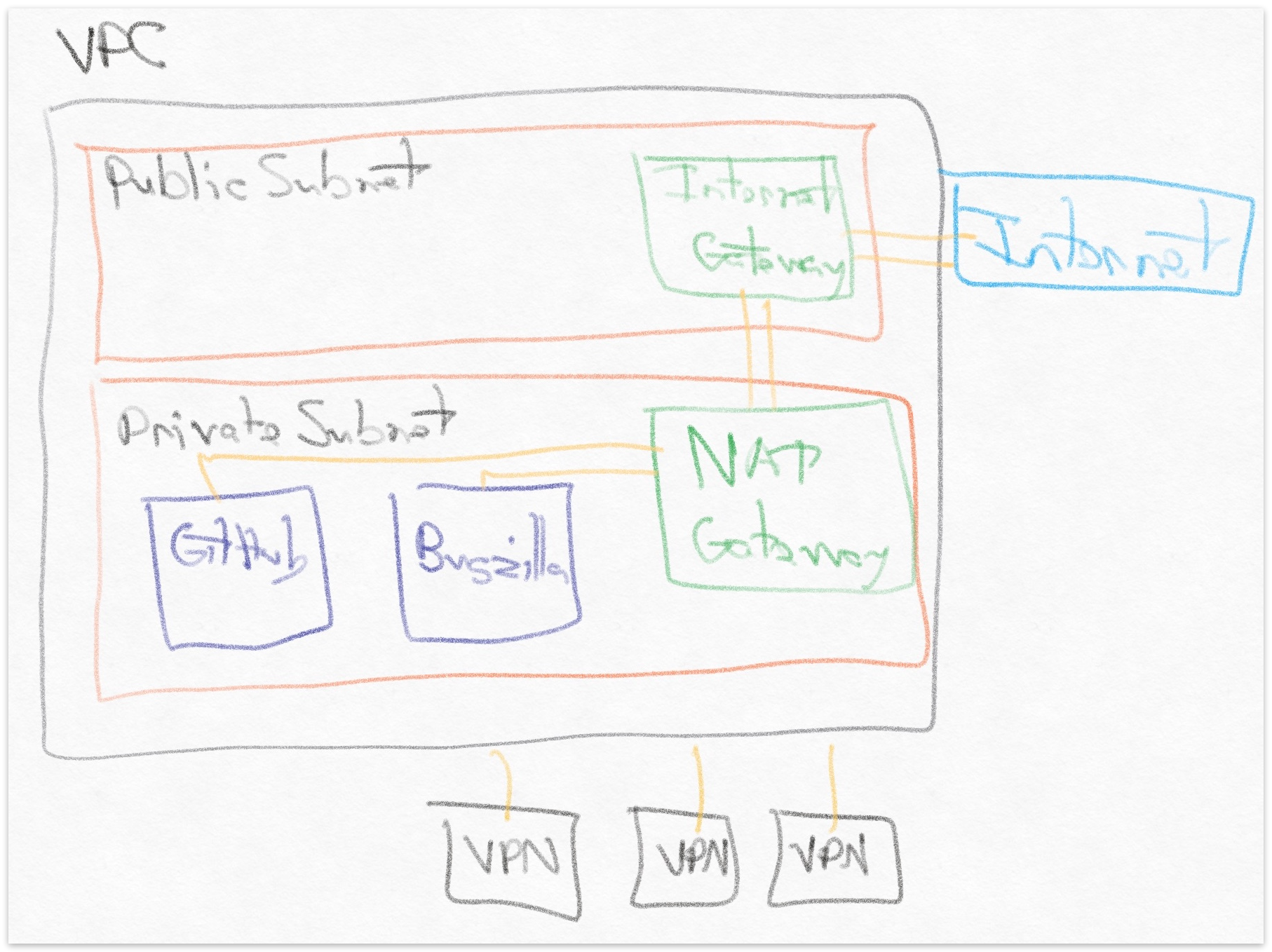 Amazon Virtual Private Cloud (VPC) is the overarching services with the necessary components for building a private cloud.

I used these instructions to set up the following: 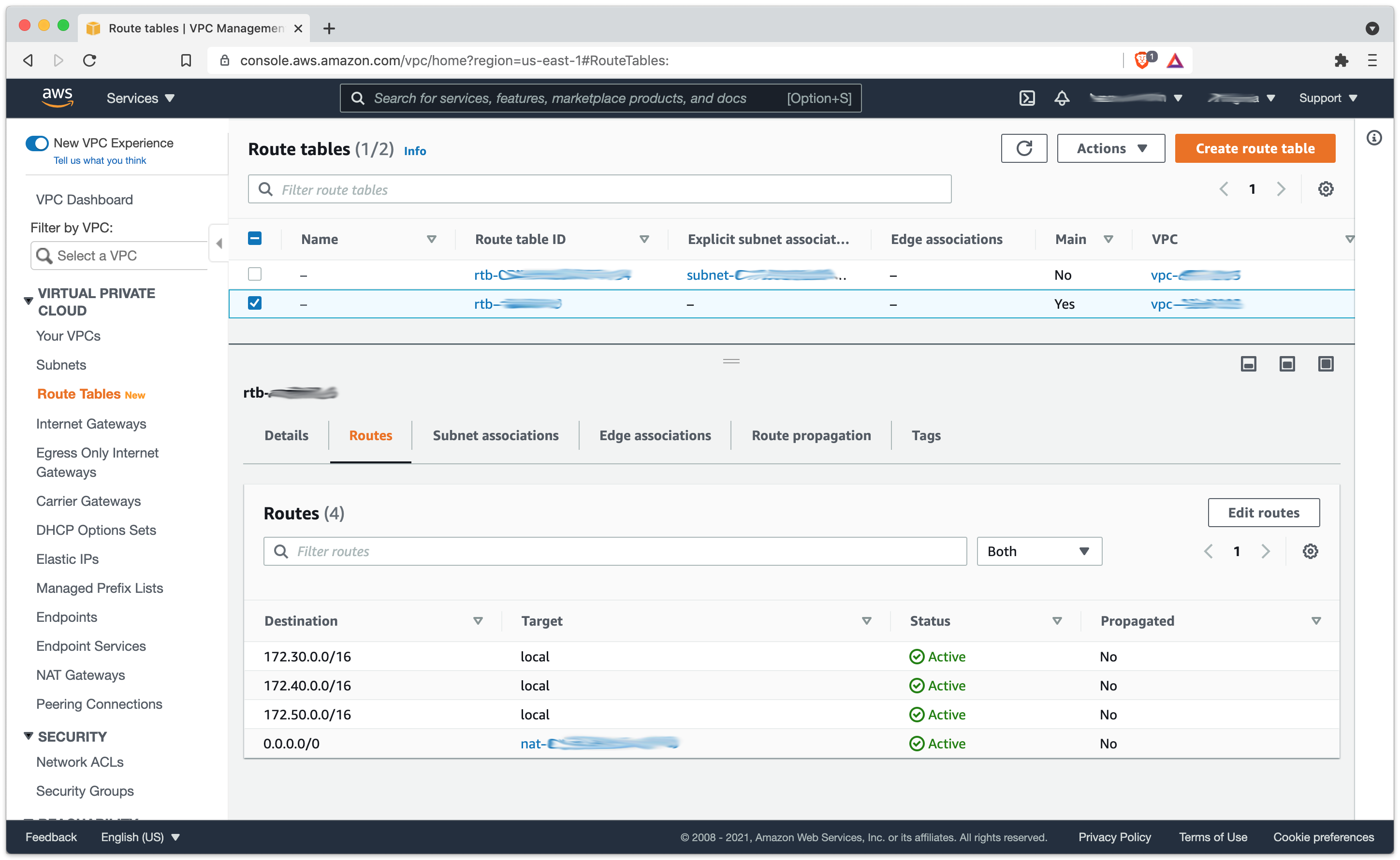 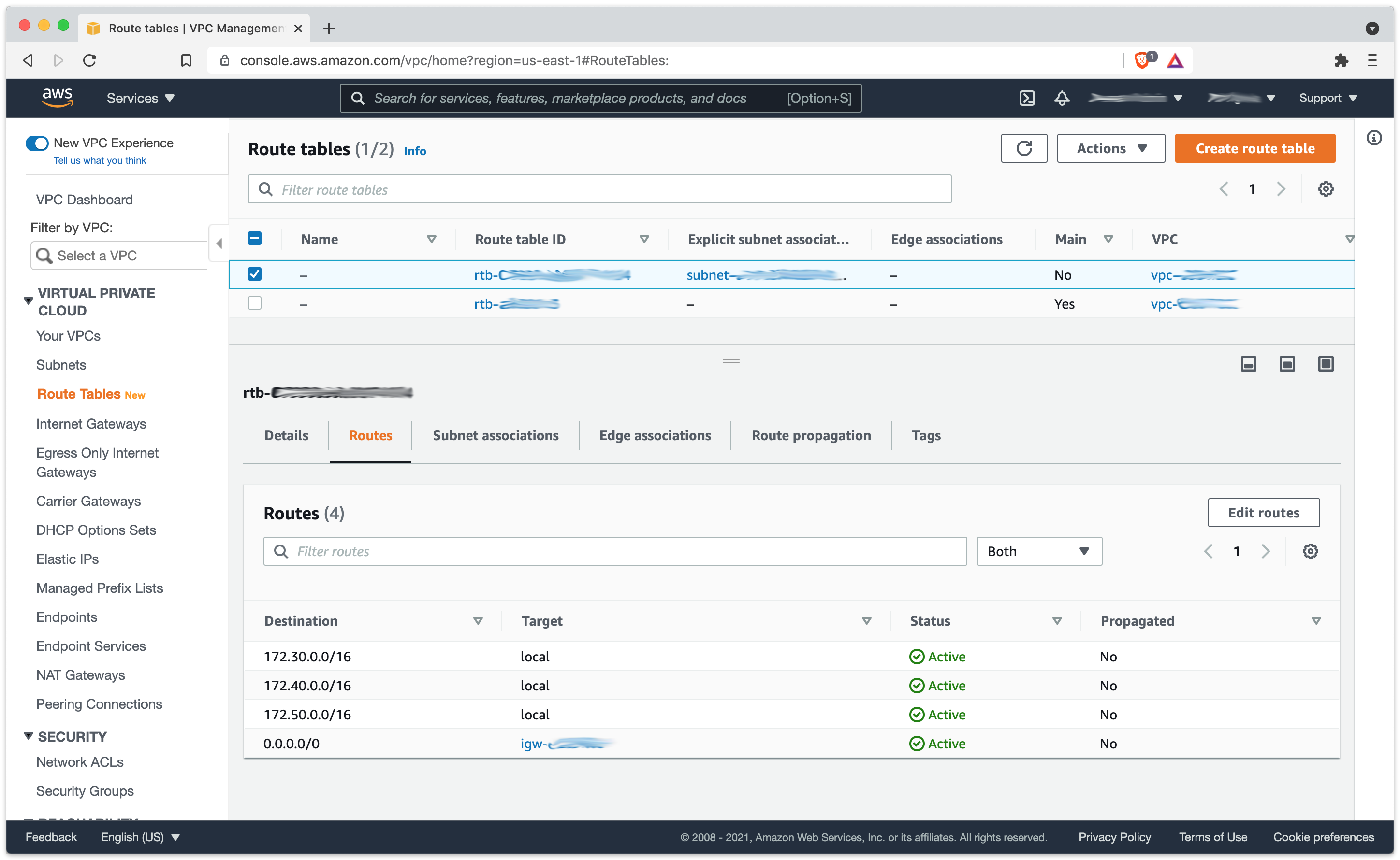 Other Route Table with Internet Gateway 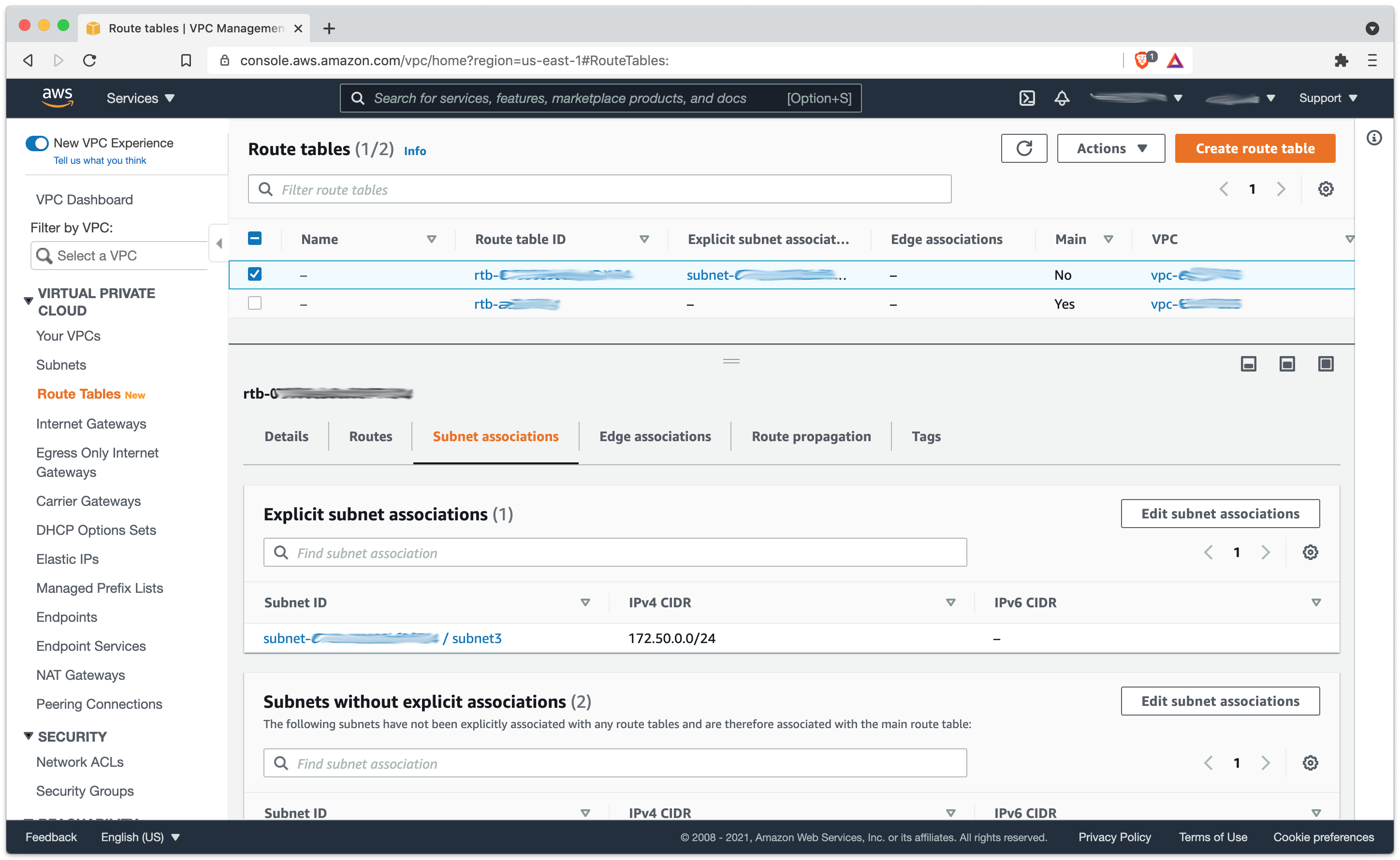 We’ve been using EC2 for 11 years in various forms, and they now have an overwhelming number of options (396) to choose from for configuration, from general-purpose to compute-optimized to memory-optimized with x86 and ARM support. For our purposes, we used t2 instances: Amazon Linux 2 on t2.medium for Bugzilla and GitHub Enterprise Server on t2.xlarge for GitHub. GitHub provides detailed setup instructions. Let’s walk through the EC2 components:

Amazon Simple Storage Service (S3) is used to store objects in the cloud. This service was one of the first from AWS; Bezos described it as malloc for the internet. 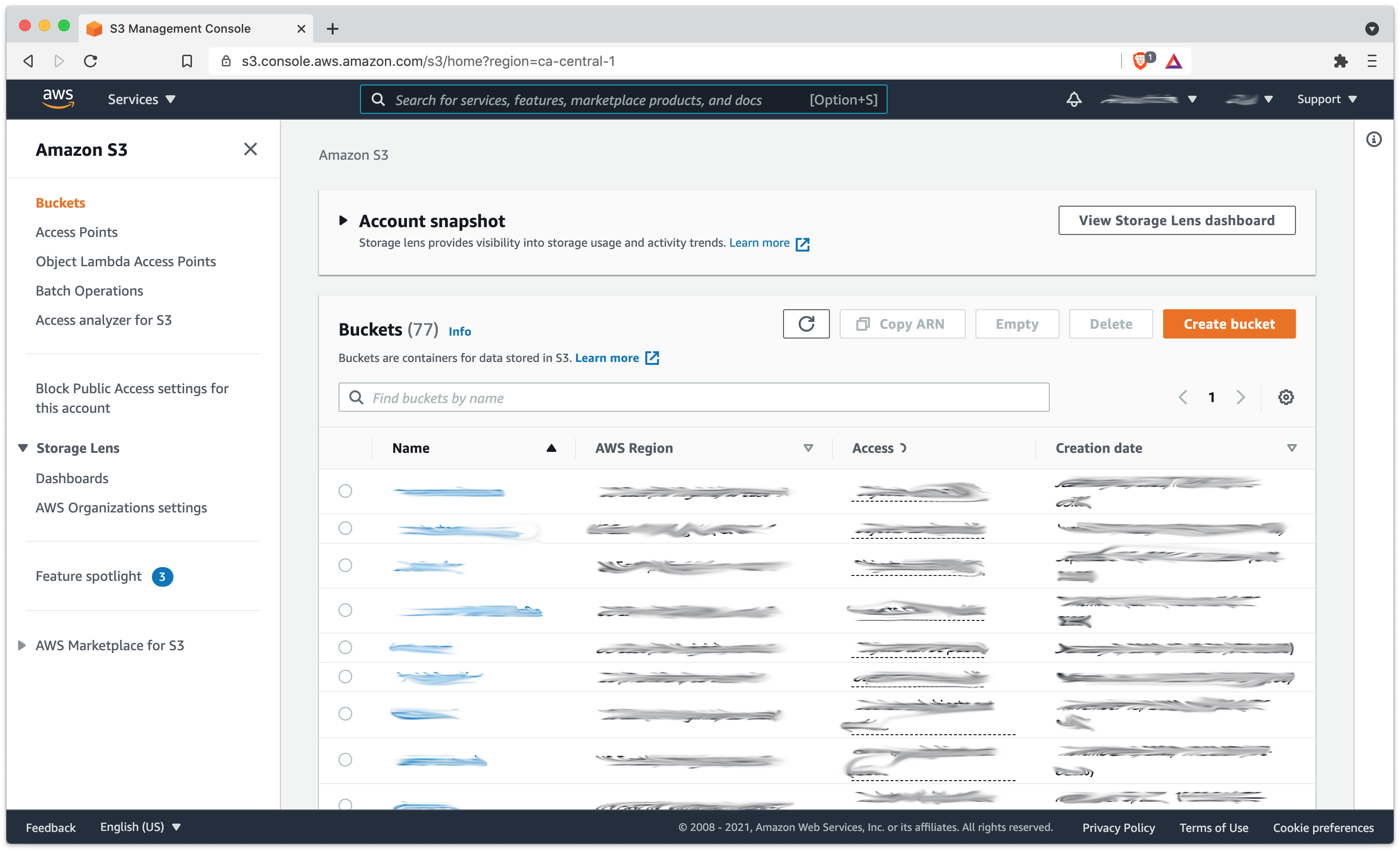 We used S3 to host the GitHub and Bugzilla backups. We use S3 for everything, with 77 buckets and counting. 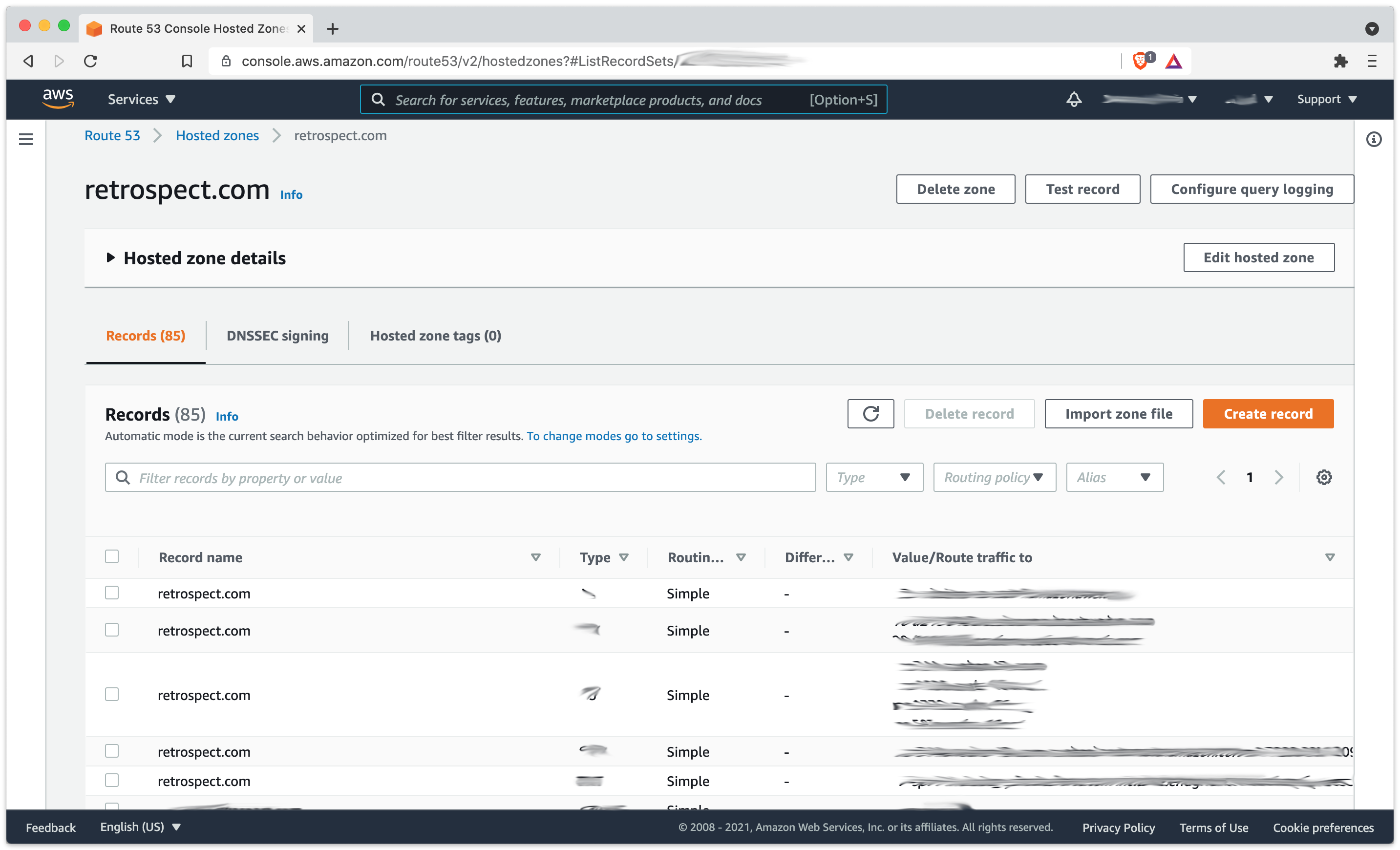 In addition to handling our website and mail DNS routing, we utilize it for giving private network instances a public DNS name, such as github.retrospect.com. Relying on a public DNS provider makes it simple to maintain and update, and it’s a fast lookup compared to private lookups that we’ve used in the past. We used to use Zerigo for DNS until Zerigo had one too many outages. (Zerigo shut down within a year.) Migrating to Route 53 took about an hour, and the monthly bill went from $13/mo to $3/mo. Finally, abstracting away the IP address allowed us to seamlessly switch from colo to AWS to new colo without changing our Git development settings.

GitHub Enterprise has a GitHub repo for backup and restore utilities. After setting up the configuration file, we do backups with:

And you can do a restore with:

For Bugzilla, we simply tar/gzip the directory and dump the MySQL database:

One issue was GitHub’s compression. I had been using a spare Mac VM to do GitHub backups. When I compressed it to transfer to S3, I used macOS’s Archive Utility from the right-click menu. As it turns out, gzip didn’t know what to make of that. I had to tar/gzip it again and transfer it to get it uncompressed on the EC2 instance. Another important note is not using “-h” for tar because it follows symlinks rather than preserving them, doubling the size of the GitHub backup due to the “current” symlink.

Another issue was Bugzilla’s backup. A recent attachment broke the mysqldump export of the MySQL database. I had to delete the attachment from the MySQL attach_data table to get a working export. It was 2GB, going back 10 years.

The final issue was setting up Bugzilla itself. Installing the correct Perl CPAN modules is a pain, even with yum as a tool.

Migrating back from AWS to the new colo was just as easy, using the same steps in reverse.

Cloud is on-demand infrastructure. It took me a weekend–from googling “AWS VPN” to sending out VPN profiles to the team–to get the temporary environment set up. By migrating our source control and issue tracking database to Amazon AWS, the Engineering team didn’t miss a day of work while our servers were on a truck. The IT team at the other end set the environment up quickly once the hardware arrived, but we would have missed seven days of work without the AWS infrastructure.