Multicast Ping on a Mac
by Brian Dunagan

Update: To verify whether a host has multicast enabled, use ping. Run ping 224.0.0.1 in Terminal, and all multicast-enabled hosts will answer. To test a specific IP, see below.

While networks are awesome in the abstract, actual implementations are messy. Take multicast traffic. Network engineers can simply disable it, and I’m sure they have perfectly valid reasons for it. But as an uninformed user, what do you do if a multicast-enabled app doesn’t work? Is the failure the app’s fault, or is the network to blame? Enter Multicast Ping, available as an app download (PPC/Intel 10.4+) and an Xcode 3.2 project on GitHub. 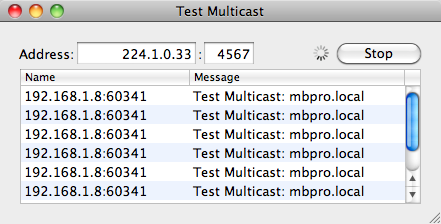 Multicast Ping is a tool for testing multicast connectivity. It tests both directions, sending multicast packets to the supplied address/port while also listening for multicast packets on that same address/port. Run it on two Macs, and the app will let you know if the computers see each other. Both copies should display connections; if they don’t, the problem is in the network.

The icon is courtesy of Artua Design Studio via Iconspedia.

There are a couple great tools for testing multicast connectivity: ssmping for Windows and Linux and mctester for python (which means most modern systems). However, I couldn’t find any equivalent implementations in Objective-C for the Mac, so I used mctester as a reference to write this Objective-C/Cocoa version.

The code (see below) is straight-forward: two methods for creating send and receive sockets and two methods for sending and receiving the multicast traffic. Take a look at the GitHub repo to see the code in context.